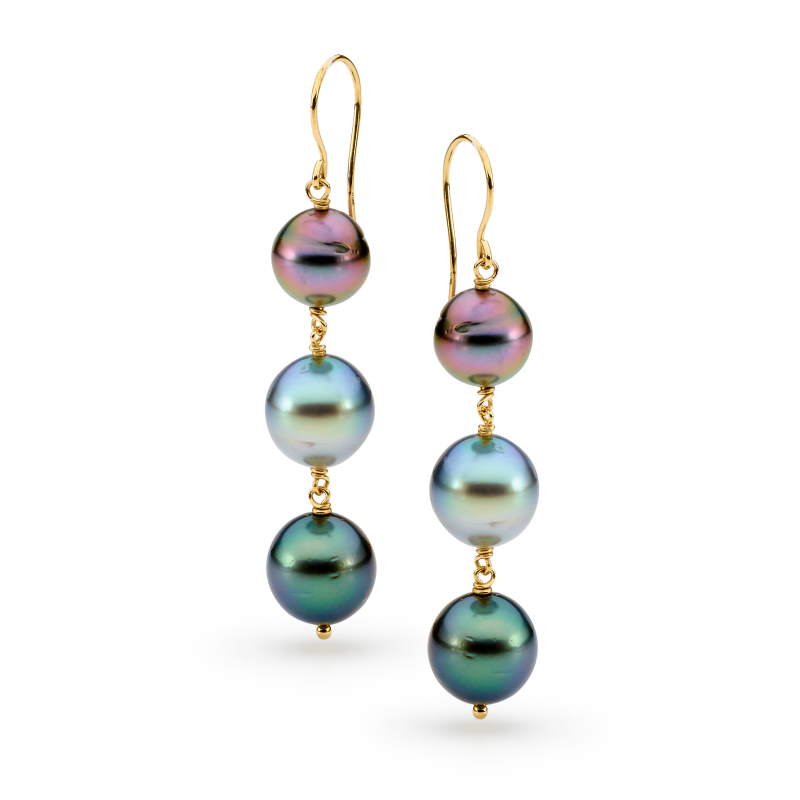 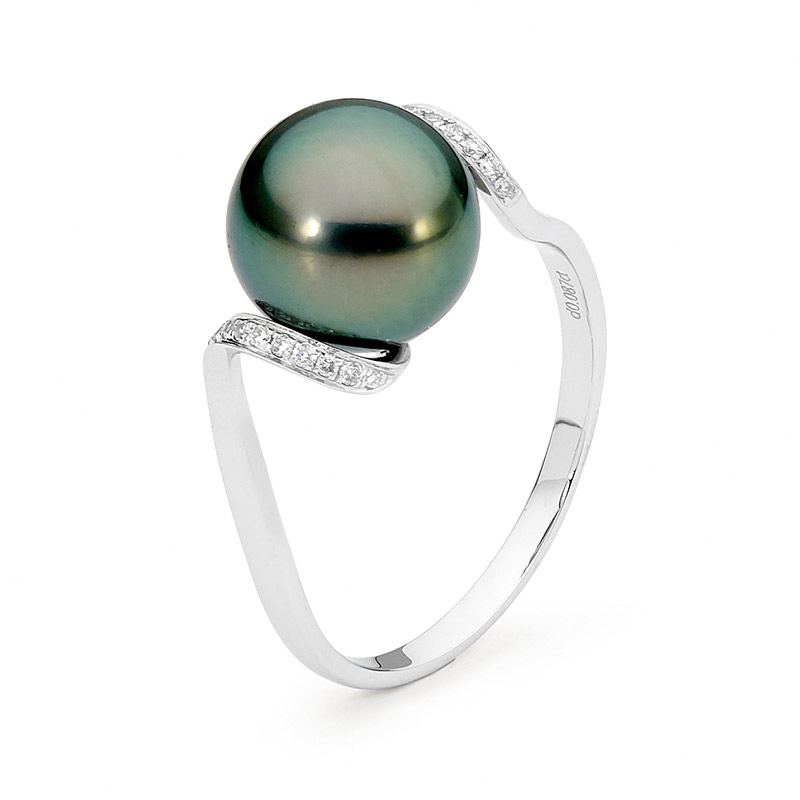 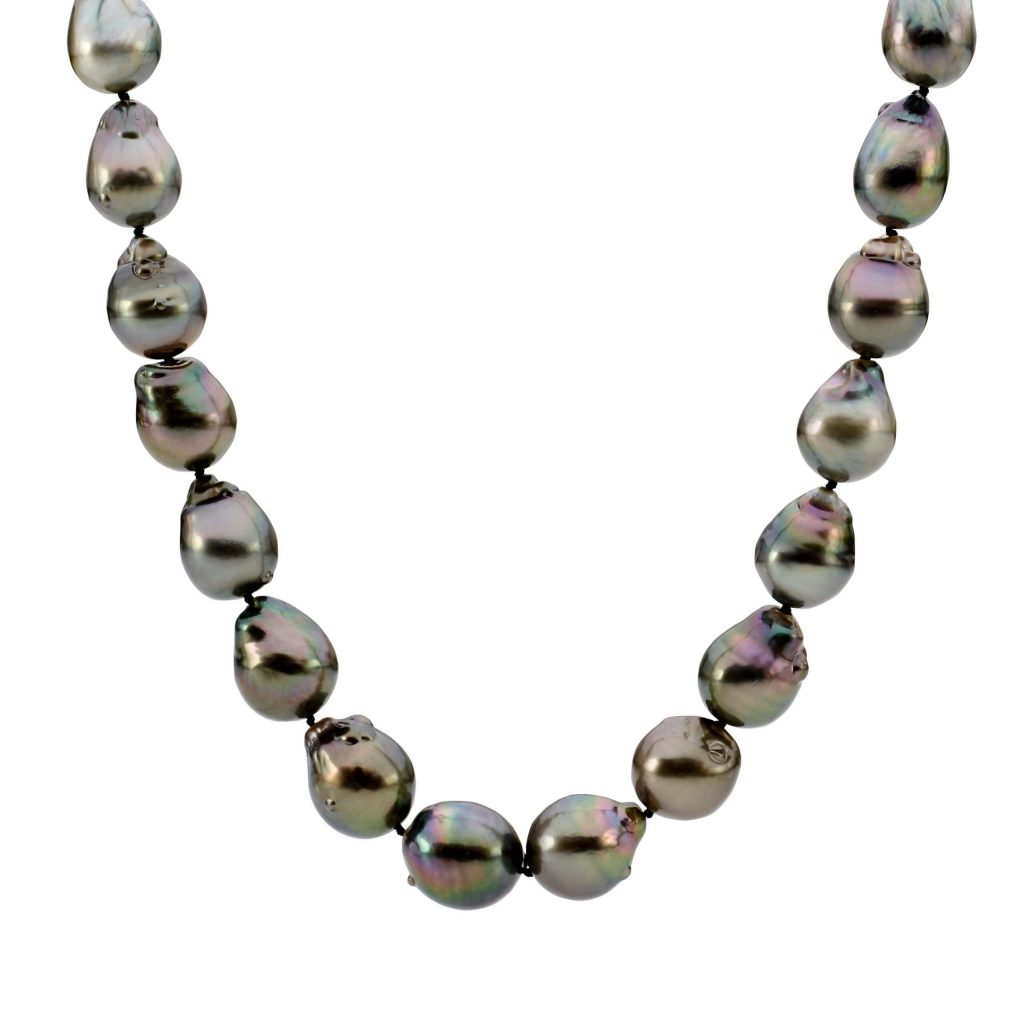 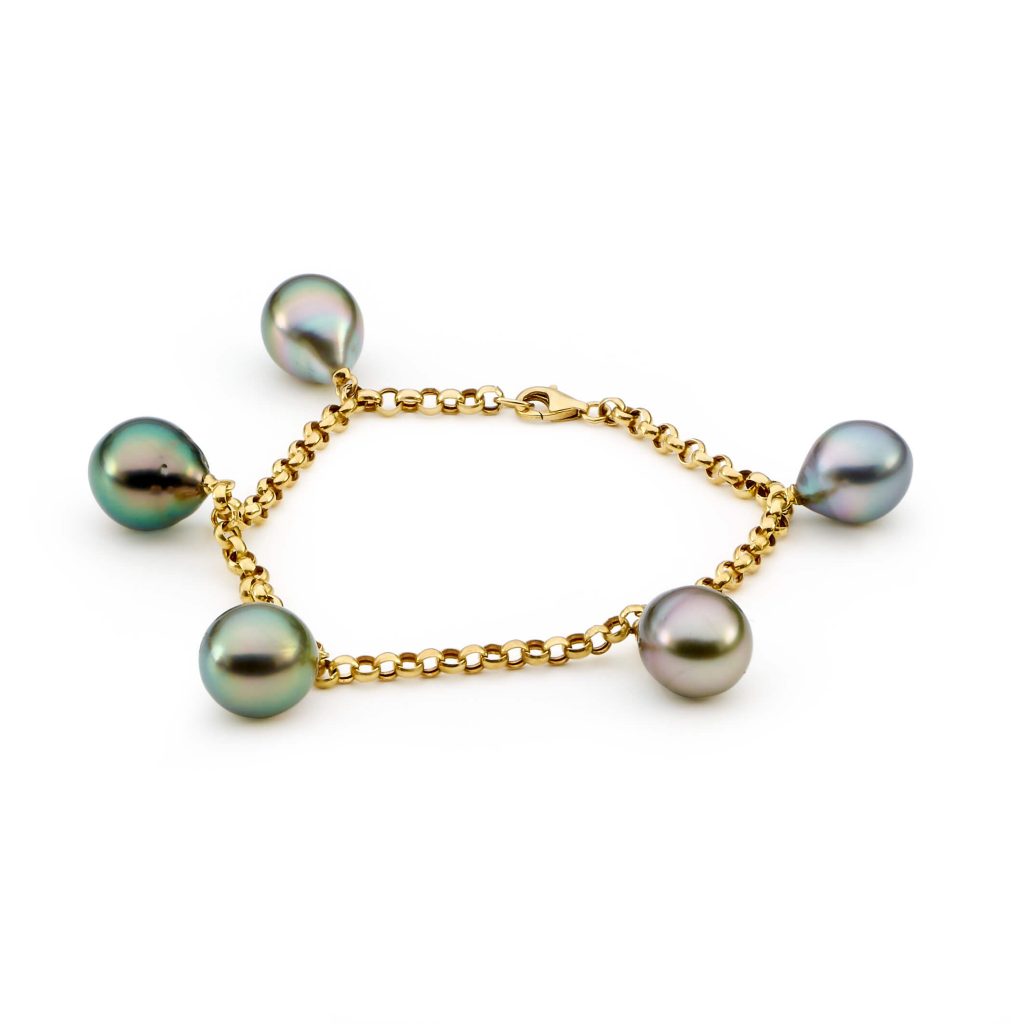 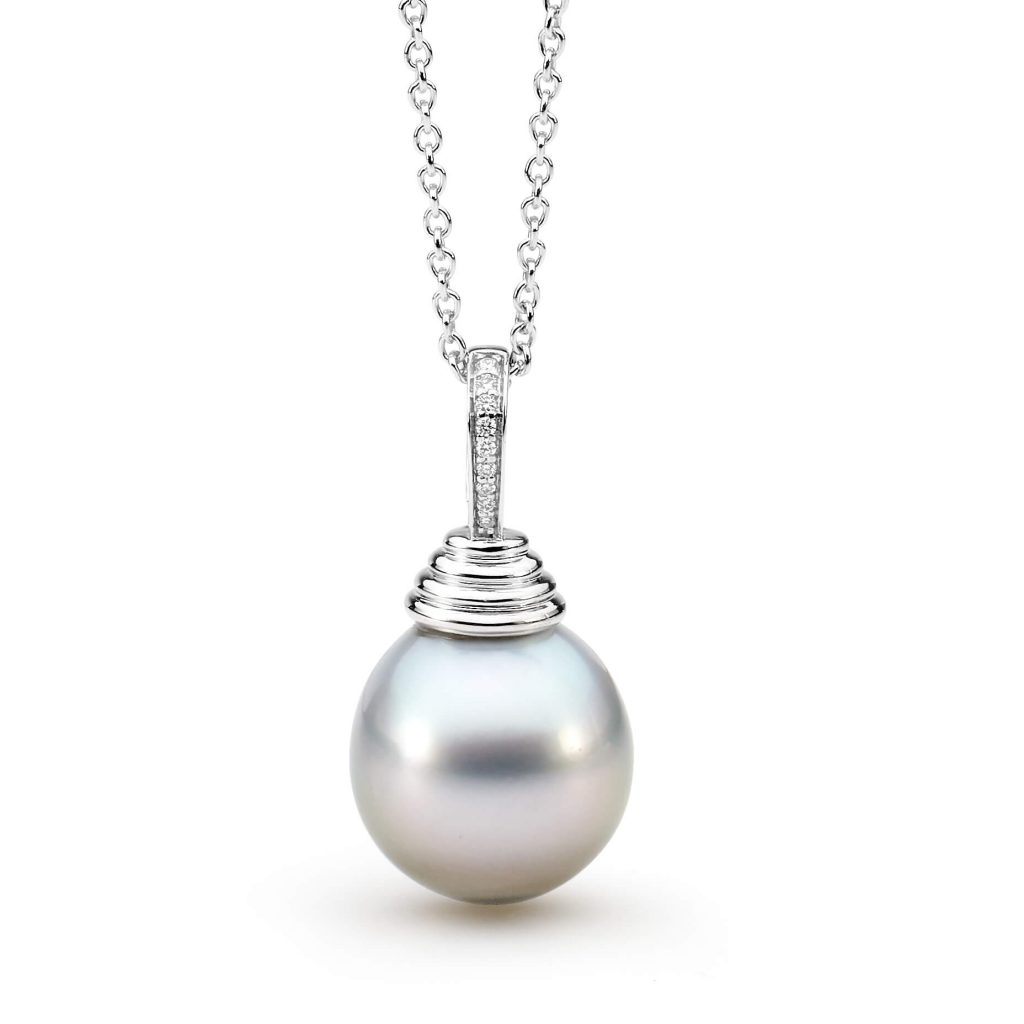 Tahitian cultured pearls or “Black Pearls” have been farmed or cultivated since the 1960’s in the black-lipped pearl oyster, Latin name – Pinctada Margaritifera. They are found amongst the atolls and islands in the archipelago that makes up French Polynesia.

French Polynesia comprises of around 118 islands in the South Pacific Ocean, stretching over more than 2000 kilometres (1200 miles). Divided into the Austral, Gambier, Marquesas, Society, and Tuamoto Archipelagos. Its total land area is just over 4000 square kilometres. There is also Tahitian Pearl production in the Cook Islands and Fiji that produces pearls from the same oyster.

Prior to cultured pearl farming being set up, there existed a huge natural pearl and pearl shell business centred around the Tuamoto Archipelago. Throughout the 1800’s and 1900’s trade in the shells was predominantly for mother of pearl which was made into buttons and pearl inlay for cutlery and other artifacts such as hand mirrors, pistol handles and bible covers. 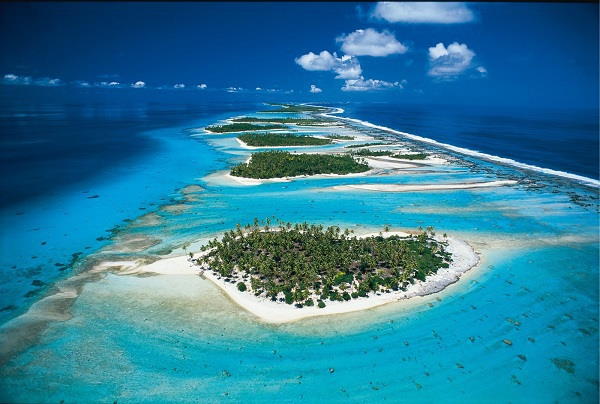 Through the years family groups have owned and operated the major pearl farms within French Polynesia. The descendants of the great Parisian natural pearl and gemstone trade leader, Leonard Rosenthal (whose books published in the 1920’s; The Kingdom of the Pearl/In the Garden of Gems illustrated by Edmund Dulac) Jacqui and Hubert Rosenthal and later his son Cyril, founded Le Societe Perliere de Manihi in 1967 and along with the Foucarde and the Wan families have dominated the pearl business in French Polynesia.

Though Tahitian Pearl Culturing started in the 1960’s, the first recorded official export of Tahitian cultured pearls was in 1972 with a value US $3,663. By 1996, US $150 million was exported per annum, principally to Japan and Hong Kong and The United States and Europe. By 2019 this figure had dropped due to diminished production to nearer $ 70 million. Today various trade organisations and pearl farming collectives band together and sell at auction to select pearl wholesalers worldwide.

The production of Tahitian pearls these days averages 8, 9 and 10 millimetres in size and the shapes of the pearls are predominantly round, off round, drop, semi drop, button, circled and semi baroque and baroque. Most cultivators are keeping the seeding to harvesting cycle at one year, hence the relatively smaller sizes, (The average size of the Australian south sea cultured pearl is 12.5-13). Hence the price of 11 millimetres and above sized pearls is sharply higher for Tahitian pearls.

The pearl culturing process works with nature to co create a Tahitian pearl. This process involves an expert technician, who inserts a round bead or nucleus made from a shell into the reproductive organ of a mature Pinctada Margaritifera oyster. The technician also places a small strip of mantle tissue from another similar oyster onto the nucleus and this process causes the oyster to isolate the nucleus and cover it with layers of the nacre which causes the pearl to be lustrous and colourful. Once the nucleus is inserted, nature takes over and pearl farmers need to keep cleaning the oysters every few weeks so they can open and feed on nutrients in the water and a year or tow later the pearl can be harvested. 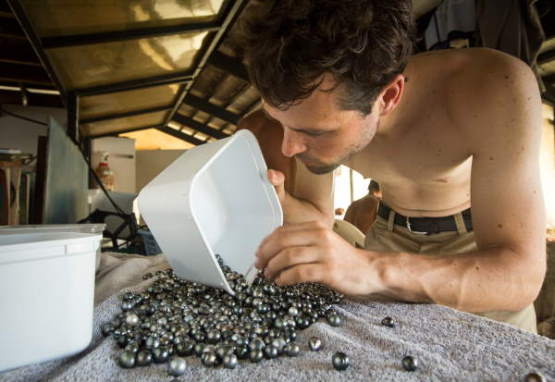 When the host oyster rejects the nucleus made of mother of pearl and inserted near the gonad of the oyster to stimulate pearl nacre production, the oyster usually makes another pearl anyway and this non-nucleated pearl is all nacre and is called Keshi, a Japanese word for poppyseed  or small thing. Keshi pearls are the natural bi-product of the culturing process. Tahitian keshi pearls are particularly beautiful in a variety of colors and shapes.

There can be a rainbow iridescence in the colours of the Tahitian pearls from jet black or telephone ( Bakelite) black, to peacock, green, pink, aubergine, red, silver, platinum, pistachio, blue, cream, off white, brown and yellow, a genuine kaleidoscope of colours. The pearls have both undertones and overtones of colour making them so individual, so hard to match, and so exquisite to look at in detail. All these colours are naturally occurring, so nothing is needed to be done to the pearls after harvesting except drilling and turning into jewellery. 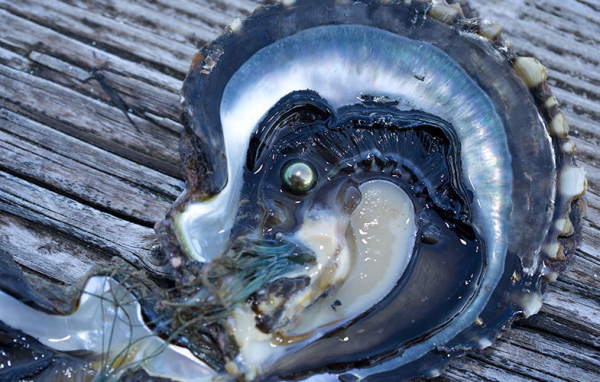 Tahitian pearls have been turned into exquisite jewellery by the likes of Harry Winston, Cartier, Tiffany, Van Cleef and Arpels and Mikimoto all making magnificent pearl rings, pearl earrings, collars, pearl necklaces, pearl pendants and enhancers. The brilliant colours and rainbow iridescence makes Tahitian pearls a perfect match with gemstones of all colours and the pearls perfectly compliment the gemstones and vice versa. 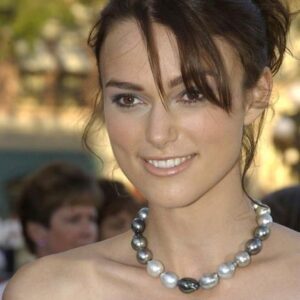 At Aquarian Pearls we especially love to pair tourmalines with green and red through them with Tahitian pearls and natural coloured sapphires in blues, greens, pinks and blues.

The United States market is a huge consumer of Tahitian pearls and in our business on Gem Shopping Network, 60 to 70 per cent of the turnover is with jewellery created with Tahitian pearls which we sell with the brand name Aquarian Pearls.

Domestically within Australia we sell as Matahina Pearls on the TV station TVSN and in this business we sell a lot of pearl jewellery especially with the gemstone and Tahitian pearls matched together. 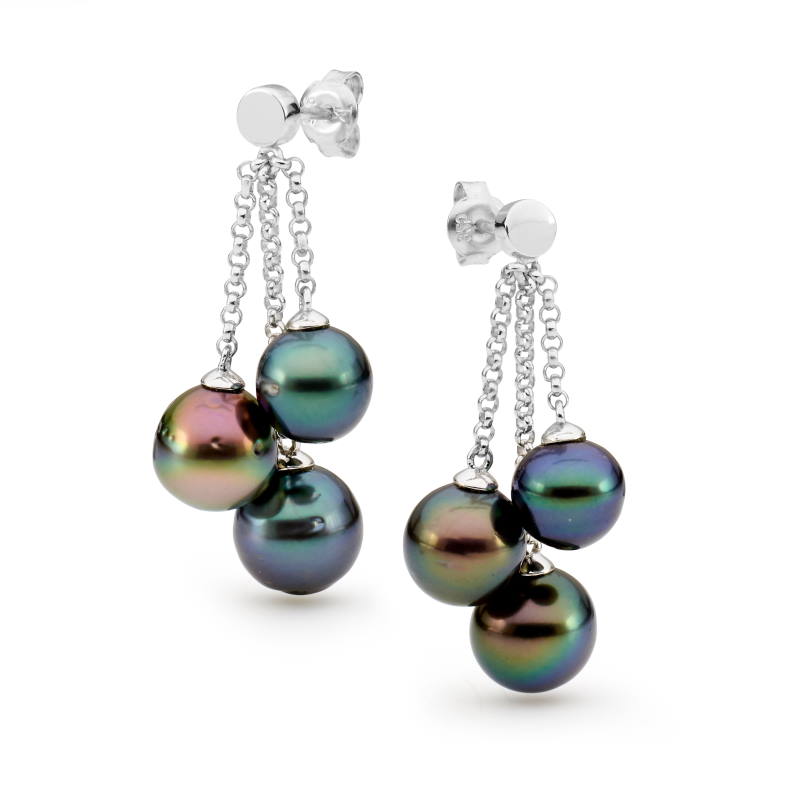 What is the history of Tahitian black pearls?

Tahitian pearls also known as black pearls and Tahitian cultured pearls were first cultivated in French Polynesia in the 1960’s. These are cultured pearls, though naturally formed pearls have been traded throughout several centuries preceding the 20th century.

The most famous black pearl in history was called Servilia’s pearl given to his mistress Servilia by Julius Caesar who is said to have acquired it in France or Egypt or Britain. It was said to be a giant black drop shaped pearl worth six million sesterces equivalent to 1.5. Billion dollars in 2019 money!

Black pearls are cultivated in Pinctada Margeritifera shells, native to French Polynesia whose capital is Papeete on the Island of Tahiti. These shells are also prolific in Mexico and The Cook Islands and throughout the Indo Pacific but the centre of modern day black pearl business is in Papeete and so the pearls have become know generically as Tahitian pearl or black pearls.

Commercial harvests of these Tahitian Pearl harvests were first brought to worldwide attention by Jean Claude Brouillet, Jacques Brannele, The Rosenthal family, and Salvador Assael who collaborated in New York with bringing these amazing black Tahitian cultured pearls to the public’s attention through the genius of Harry Winston.

Tell us about Tahiti?

Tahiti is the main Island of 118 Islands and atolls that make up French Polynesia that stretch over 2200 kilometres of the Pacific Ocean roughly in between the east coast of Australia and the west coast of the United States. Nearly 70 per cent of all Polynesian population of 275’000 lives on Tahiti and its capital Papeete is the political and commercial centre of all activity.

Black pearls cultivated across most of the islands and atolls that make up French Polynesia account for 55% of all exports and all pass through Papeete on their way to market. There are a wealth of Tahitian pearl retail stores throughout French Polynesia and the Government closely monitors the pearl business. Export certificates were not granted to pearls of inferior quality.

Where can I buy Tahitian Pearls and in what forms?

Most jewellers stock some Tahitian Pearls. At Aquarian Pearls, in our Sydney office and in our online store, we have a wide variety of Tahitian Pearls in the following styles.

Shorter choker style strands and longer rope style strands simply set with gold clasps for wear short or long. These are made in uniform colours or in contrasting colour tones if you prefer a multi-coloured look. Sizes of these strands can be uniform and all the same, or graduated from small at the base of the neck to larger in the front. Shape can be round or button or droppish or baroque and there are strands with combinations of sizes and shapes and other coloured pearls such as Australian white pearls or golden pearls or champagne coloured pearls. As well as simple strands of pearls there are also what pearls on leather or suede which gives a contemporary look.

Tahitian pearl bracelets are also very popular and a handy accessory for any wardrobe.

We also offer a range of gemstone facetted beaded necklaces such as rubies, sapphires, and tourmalines which have a single Tahitian pearl enhancer that attaches over the knot or over one of the beads on the necklace. We often match the Tahitian pearl colouring with the gemstones and this gives a magnificent contrast especially when one can see pinks and oranges and purples and greens with the gemstones and the pearls. Tahitian pearls are highly sought after for the strength of these colours that radiate with light and life and lustre and make for magnificent statement pieces of jewellery.

Tahitian pearls in drop shapes are often so perfectly formed and classic looking that they make excellent pairs of earrings, or single pendants. Tahitian pearl earrings are always in fashion.

Round shaped and button shaped and baroque shaped and circled Tahitian pearls make wonderful earrings and pendants as well.

The Tahitian pearl ring is a favourite of our clients and always fashionable. These are usually round in shape but not always and make an excellent single piece of jewellery or even as a match to accompany and accessorize a Tahitian pearl necklace.

Tahitian pearls are very popular for men as well as women and when set on a chord of leather or on a rubber bracelet or necklace they make a great accessory and are very popular these days with surfers, actors, entertainers, and more and more men are taking pleasure from wearing a pearl, with its great connection to Mother Nature, and the oceans.

However you wear your Tahitian pearls, we wish you well to wear them!!!

What does one look for when buying Tahitian pearls?

Tahitian pearls are commonly called black pearls but in fact their colours are as wide as a rainbow and colour is one of the most important qualities or virtues of Tahitian Pearls.

There is the telephone black straight black colour, the variations of greens from lime green, pistachio, metallic green, peacock green with splashes of red and green combined, aubergine/eggplant a purply black, red often called cherry red, bronze or chocolate colour, blue, silver, near white, platinum, a veritable rainbow assortment of colours. The colour of the pearl is dependent on the host oyster which in Tahiti is Pinctada Margeritifera, a saltwater mollusc more commonly known as a black lipped pearl oyster.

A round bead or nuclei made out of mother of pearl shell, usually found in the Mississippi river and exported to pearl cultivators around the world, is placed near the gonad of the host Tahitian oyster which starts the culturing process. The host oyster deposits nacre around the bead which is the actual pearl coating and the more the coating the brighter the pearls. Oysters are kept underwater and brought up to the surface for cleaning but otherwise left alone in net panels and baskets underwater and the usual culturing time in Tahiti and French Polynesia is one year leading to an abundance of 8, 9, and 10 millimetre pearls.

Size; Tahitian Pearls range from 7 millimetres up to 18 millimetres though smaller and larger have been grown. In recent years culturing periods have dropped from two years to one year or less leading to a shortage of larger 12 + millimetre sized pearls and great quantities of 8/9/10 millimetre pearls making them very affordable in commercial quantities.

Lustre; The better the coating of nacre laid down by the host ouster, the better the lustre and this is one of the most important values when judging pearls.

The skin or surface of the Tahitian pearl is also evaluated and typically graded into the following five categories. Flawless and completely clean, very slightly spotted with a fully clean face, half spotted / half clean, more heavily spotted, severely spotted.

So when evaluating and describing the virtues of Tahitian pearls, one needs to assess size, shape, colour, lustre and cleanliness of surface skin.