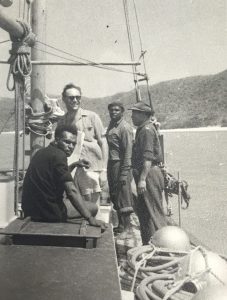 Aquarian Pearls was set up in 1985 in Sydney, Australia as a South Sea Pearl trading company by David Norman, fifth generation pearl merchant. However, the family story dates back to the 1830’s
David’s father Boris owned a pearl farm in Thursday Island at the far northern tip of Queensland, Australia, as well as running his father Michel’s pearl company, The Australian Pearl Co. based in London which was incorporated in 1937 after many years trading in Paris on the Rue Lafayette.

Michel Norman was born in 1885 and as a young man learnt about natural pearls with cousins in Paris and London. In the 1920’s he dealt in pearls and jewellery, including trading in three Imperial Faberge Easter Eggs in 1927.

Michel journeyed to Australia to purchase natural pearls and whilst there fell in love with Rebecca his natural pearl suppliers’ eldest daughter, who returned with Michel to Paris to set up a home and raise their children.

Rebecca’s father and grandfather were pearl merchants, and her brother Alec was the resident doctor in Broome, the pearling port in North West Australia and he was responsible for installing the first iron lung in Broome hospital in 1937 to help divers suffering from nitrous oxide poisoning called the bends.
David’s nephew Charlie Barron, lives in London and it the six generation of Normans in the pearl business. He specialises in bespoke pearl jewellery and natural pearls. The family for six generations has had the privilege and honour to supply the worlds’ leading retailers with pearls.

Today Aquarian Pearls is dedicated to bringing you the finest pearls and pearl jewellery in the world direct from the worlds’ finest pearl cultivators in Australia, Japan, French Polynesia, The Philippines, Burma and Indonesia.

Our pearls are chosen for outstanding lustre and cleanliness of skins, strength and richness of colour, whether black, white or golden. All our pearls are of the finest quality, fully certified and guaranteed.