A pearl is a hard, glistening object produced within the soft tissue of a living shelled mollusc. A pearl is composed of calcium carbonate, which has been deposited in concentric layers. The ideal pearl is perfectly round and smooth, but many other shapes, known as baroque pearls, can occur.

The most valuable pearls occur spontaneously in the wild, but these are extremely rare. These wild pearls are referred to as natural pearls. Cultured or farmed pearls from pearl oysters and freshwater mussels make up the majority of those currently sold.

One family of nacreous pearl bivalves – the pearl oyster – lives in the sea, while the other – a very different group of bivalves – lives in freshwater; these are the river mussels such as the freshwater pearl mussel.

The Akoya pearl is a saltwater cultured pearl from the Akoya oyster (Pinctada fucata martensii). For nearly 100 years, Akoya pearls grown off the coast of Japan have been the classic pearl of choice, as they are the most abundant type of saltwater pearl with quick production time and the longest cultured history

Akoya pearls are best known for their perfectly round shape and sharp, reflective, pinky, luster.

While exceptions do exist, most Akoya pearls produced today range in sizes from 4 to 10 mm. The shape is most commonly round, which makes them a popular choice for making strands and jewellery.

Their large size, limited culturing area, and extended growth period all combine to make White South Sea pearls the rarest of all pearl types. Found in colours ranging from optic white to a light cream, these pearls are prized by collectors and designers alike. The luster of South Sea pearls, is soft and luxurious.

As with other saltwater oysters, the South Sea pearl oyster is bead-nucleated. However, the growth period is approximately 2-4 years, unlike the Akoya pearls, which develop in less than half that time. Being a delicate organism, this type of pearl oyster is particularly susceptible to disease and stress, which is one reason why the culturing area for South Sea pearls is quite limited. Attempts to expand South Sea pearl farming have met with little success because the oysters do not thrive outside their native, natural environment. The majority of white South Sea pearls are cultured along the northwest coast of Australia

South Sea pearls can be found in the range of 8 to 20 mm, with the average being 12 mm. Although extremely rare, some pearls have been found larger than 20 mm. Only 10-30% of each harvest will be round or near-round. Baroque and drop-shapes are prevalent however the circle shape is the most common

Since the natural colours of South Sea pearls are so rich and beautiful, after harvesting they are merely washed and buffed to remove any residue and bring out their natural glow. 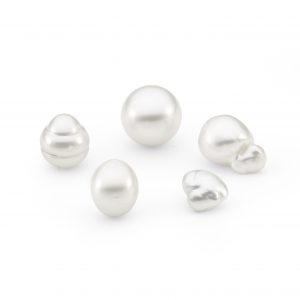 South Sea White Pearls come in many shapes and sizes.

Golden South Sea pearls are among the largest, most valuable pearls produced today. They are grown in the gold-lip variety of the Pinctada maxima, South Sea pearl oyster. Their warm, golden tones are completely natural, and no treatments are needed to enjoy the beauty of these luxurious gem

While white South Sea pearls predominately come from Australia, golden South Sea pearls are now primarily grown in the Philippines, Indonesia and Burma (Myanmar) with Australia making up only a small percentage of Golden Pearl supply.

Pearls produced by the gold-lip South Sea pearl oyster range is colors from a creamy white to a deep gold. The varying hues in between are often referred to as yellow and champagne.

South Sea pearls are quite large, and they tend to have very thick nacre. For this reason, not all golden South Sea pearls are as perfectly spherical as other saltwater pearl varieties. In a typical pearl harvest, there will be a large number of drop pearls, button pearls, baroque pearls and circle pearls.

Golden South Sea pearls can grow quite large. An 8 mm pearl would be considered a large pearl if akoya, but this is the smallest size one will find in South Sea. The average size is in the 10 to 13 mm range, and some remarkable pearls have been found as large as 20 mm. 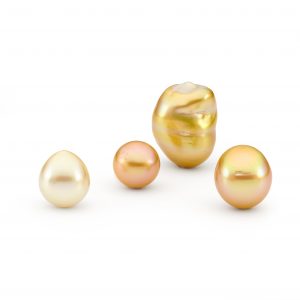 The many shapes of of Golden South Sea Pearls

Black pearls are from the Pinctada margaritifera or Black-lip pearl oyster, and are more commonly known as Tahitian pearls. Often referred to as black pearls, however they have a remarkable colour range that covers the spectrum – from light, creamy white and grey, to regal greens, iridescent peacock and deep black. Tahitian pearls are relative newcomers to the pearl world, popularized only as early as the mid-1900s by the efforts of Mr. Robert Wan of Tahiti and his New York-based colleagues.

The average size of a Tahitian Pearl is 11mm with a range between 7mm and 18mm being produced, however any Tahtian pearl over 16mm is considered quite rare. 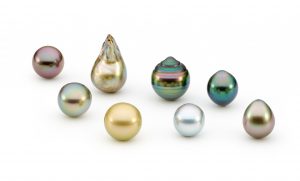 The many shapes and colours of Tahitian Pearls

Natural Pearls form when an irritant – usually a parasite and not the proverbial grain of sand – works its way into an oyster, mussel, or clam. As a defence mechanism, a fluid is used to coat the irritant. Layer upon layer of this coating, called ‘nacre’, is deposited until a lustrous pearl is formed. The “nacre’ is actually layers of calcium carbonate (CaCO3) in the form of the mineral aragonite or a mixture of aragonite and calcite (polymorphs with the same chemical formula, but different crystal structures) held together by an organic horn-like compound called conchiolin

A cultured pearl undergoes the same process. The only difference is that the irritant is a surgically implanted bead or piece of shell called Mother of Pearl. These ‘seeds’ or ‘nuclei’ are most often formed from mussel shells.

Quality cultured pearls require a sufficient amount of time – generally at least 3 years – for a thick layer of nacre to be deposited, resulting in a beautiful, gem-quality pearl. Lower-quality pearls have often been ‘rushed’ out of the oyster too quickly (sometimes a year or less) and have a too-thin coat of nacre.

Oysters must reach a mature age, which can take up to 3 years, and only then can be implanted or naturally receive an irritant. Once the irritant is in place, it can take up to another 3 years for the pearl to reach its full size and nacre thickness.  Of the pearls produced, only approximately 5% are of sufficient true gem-quality for top Jewellery makers.

Pearls are unique among gemstones in that they are natural, organic products of living creatures, so they have different grading standards. The most recognized ranking system is: A, AA, AA+, and AAA to grade the pearls and Six factors determine the quality, value, and beauty of pearls: nacre, luster, surface, shape, color and size.

The first step is to identify the type of pearl; Freshwater, Akoya, Tahitian or South Sea, the four main pearl types used in jewellery. Each type of pearl is produced by a different species of mollusk (pearl oyster), and each mollusk lives in a different region of the world under very specific climatic conditions.

Nacre is the natural substance that the mollusk secretes to protect its sensitive flesh from irritants such as shell fragments, parasites or implanted beads. This is the same beautiful iridescent material that lines the inner surface of the mollusk shells, aptly named mother of pearl.

The cleaner the surface of the pearl, the more valuable it is. Look for an absence of disfiguring spots, bumps or cracks on the surface of a pearl, also known as “cleanliness.” Notice that the highest quality pearls have a sharp, mirror-like reflection.

A perfectly round pearl is very rare. The rounder the pearl, the more valuable it is. Baroque pearls are not symmetrical in shape, and can be lustrous and appealing, but will typically cost less than round pearls. The most common shape in a harvest is the Circle shape, identified by the concentric circles around the pearl. Other shapes are Drop, Oval and Button

Pearls come in a variety of colors, from white to black and every shade in between. It is important to distinguish between colour and overtone. For example, some naturally occurring colours are white, champagne, green, golden, and black. Within each colour category, there are a number of common overtones, or subtle variations in the surface iridescence. Choosing your preferred overtone is a matter of taste, although rosé overtones tend to look best on fair skin, while cream and gold-toned pearls are most flattering to those with darker complexions.

When all other value attributes are identical, the value of a pearl is determined by its size. The larger the pearl the more valuable. Pearls are measured by their diameter in millimeters. Tiny seed pearls can be smaller than a single millimeter, while South Sea pearls as large as 20 mm have been found. If all other quality factors are equal, the size of a pearl will determine its value. Only a 1 millimeter increase in pearl size is a substantial jump in both appearance and value. The average pearl sold today is between 6.5 mm and 7.0.

Click on the link above to watch David Norman explain how he value’s South Sea Pearls via the Gem Shopping Network.