Is a Keshi Pearl a Natural Pearl?

Natural pearls are pearls formed by nature, when an irritant has lodged inside an oyster or mollusc and in order to isolate the irritant, the host oyster or mollusc envelops the irritant in a pearl sac and deposits layers of nacreous aragonite crystals in layers like the skins of an onion. Luckily for us the nacre deposited by the oyster is sometimes shiny and lustrous, of good colour and shape suitable for jewellery.

There used to be a huge business harvesting shells which were used thousands of years ago as a bartering currency and by the turn of the twentieth century there was a huge demand for mother of pearl buttons and in lay products, and so towns like Broome in North Western Australia grew ten-fold to accommodate all the pearling activity. If a pearl diver or pearl lugger owner operator managed to find a natural pearl while preparing the shells for market, then fortunes could be made .

Divers have been finding lustrous pearls in oysters for thousands of years and there are records of the black coloured natural pearl that Julius Caesar gave to his mistress Servilia around 50 BC. Tremendously valuable, natural pearls have long been the symbol of wealth and power and majesty. Through the years the European royal houses adorned their Kings and Queens with pearls mostly discovered after Christopher Columbus and Cortez discovered and plundered the wealth of North and South Americas.

There is a huge natural pearl business in the Persian gulf that has been active for thousands of years and centres around Bahrain, Dubai and Qatar.

Famous natural pearls have been depicted in pictures through the ages. Johannes Vermeer’s Girl with a pearl earring was painted in Holland around 1665 and has been the subject of a movie starring Colin Firth and Scarlett Johansen was released in 2004. The pearl in Vermeer’s picture would certainly be a natural pearl as there were no cultured pearls before the 1900’s. This however all changed when Kokichi Mikimoto reproduced the natural process of placing an irritant inside an oyster to stimulate the growth of a pearl and thus invented the modern cultured pearl business that led to pearl cultivation beyond Japan in China, Thailand, Indonesia, Vietnam, Australia, French Polynesia, Fiji, The Cook Islands, Mexico, California, and The Philippines.

Perhaps the most famous natural pearl of modern times is La Peregrina or The Wanderer that was found in the gulf of Panama around 1650 and this magnificent tear drop shaped natural pearl has been owned by succeeding Spanish Queens, England’s Queen Mary, then on to the French royal family and then on to the Russian royal family, finally ending up with a Geneva based jeweller in the 1950’s and then being purchased some years later for Elizabeth Taylor who wore it on a magnificent natural pearl necklace in a fabulous diamond setting. 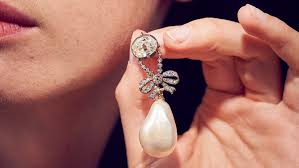 In contrast to natural pearls but no less beautiful are Keshi pearls. Keshi pearls are the natural by- product of the cultured pearl process. Meaning the process starts in a pearl farm, the oyster has been implanted with a nucleus, and the farmer is trying to culture a pearl, but the host oyster rejects the nucleus implanted within its shell to start the secreting nacre that the oyster naturally does to protect itself and isolate the foreign object inside itself. The oyster manages to spit out the bead or nucleus but goes on to make a pearl anyway. This pearl with no nucleus is a Keshi and is very close to a natural pearl.

CIBJO is the peak industry body regulating the jewellery business worldwide through blue book guides delineating nomenclature and standards and ethics for the jewellery business. CIBJO protects the Natural pearl business and its classifications and does not allow Keshi pearls to be called natural pearls though they have the same characteristics – all nacre, no nucleus and so all pearl. As the Keshi pearl is produced in a farmed environment it cannot be called natural. A pearl can only be called a natural pearl if it was discovered outside of the farming environment in a native habitat.

Keshi is a beautiful alternative to natural pearls and comes in a range of colours as do cultured pearls. The skin of Keshi is often beautifully smooth and shapes can be round, button, drop or oval, semi baroque and baroque. Depending on the host oyster and its geographic location Keshi’s’ come in colours such as white, pink, cream, champagne, golden, silver, green, black, pistachio, peacock all the colours of the rainbow really.

Keshi pearls make beautiful necklaces, rings, pendants and earrings and have been admired and treasured as long as cultured pearling has been an active business. 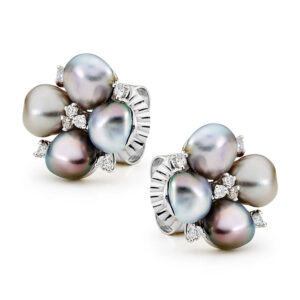