Tourmaline necklaces set with pearls are a very popular item with our customers at Aquarian Pearls.

Tourmalines first came to prominence in the late sixteenth century when brought to Europe in commercial quantities from Ceylon now know as Sri Lanka. A Tourmaline necklace was the height of fashion in the salons of the rich and powerful in European social circles at that time.

All these rainbows of colours within the world of tourmalines are available for jewellers to work with, and when combined with the rainbow iridescence of pearls, where all the colours can be seen, clearly visible at play on the surface nacre of Australian, Tahitian, Indonesian, Burmese and Philippine south sea pearls, then a marvellous marriage of pearl and gemstone is created, one giving off and showing off the colour of the other so well.

A tourmaline and pearl necklace combination turns out to be an exquisite partnership. No surprise therefore as to the popularity of a tourmaline necklace combined with pearls, one of our best sellers both on tv selling, and in our Sydney showroom and on our internet pages at Aquarian Pearls. 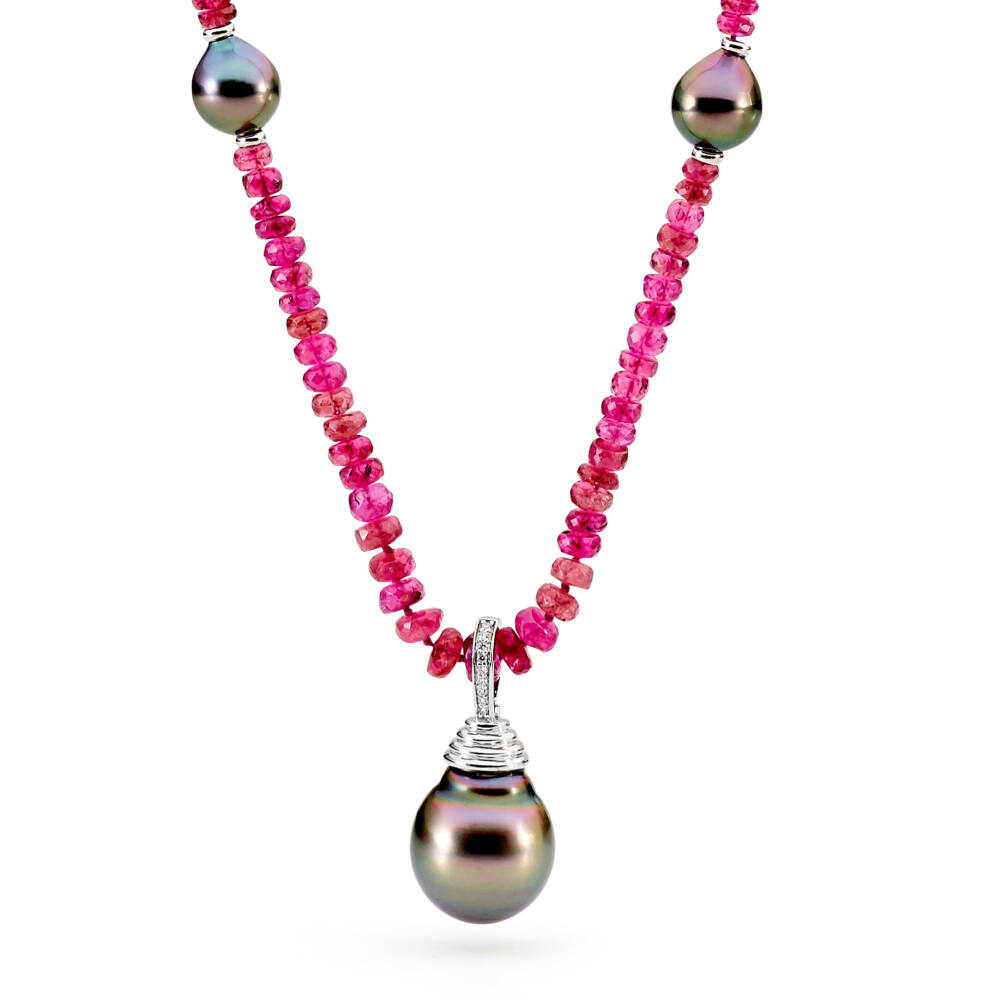 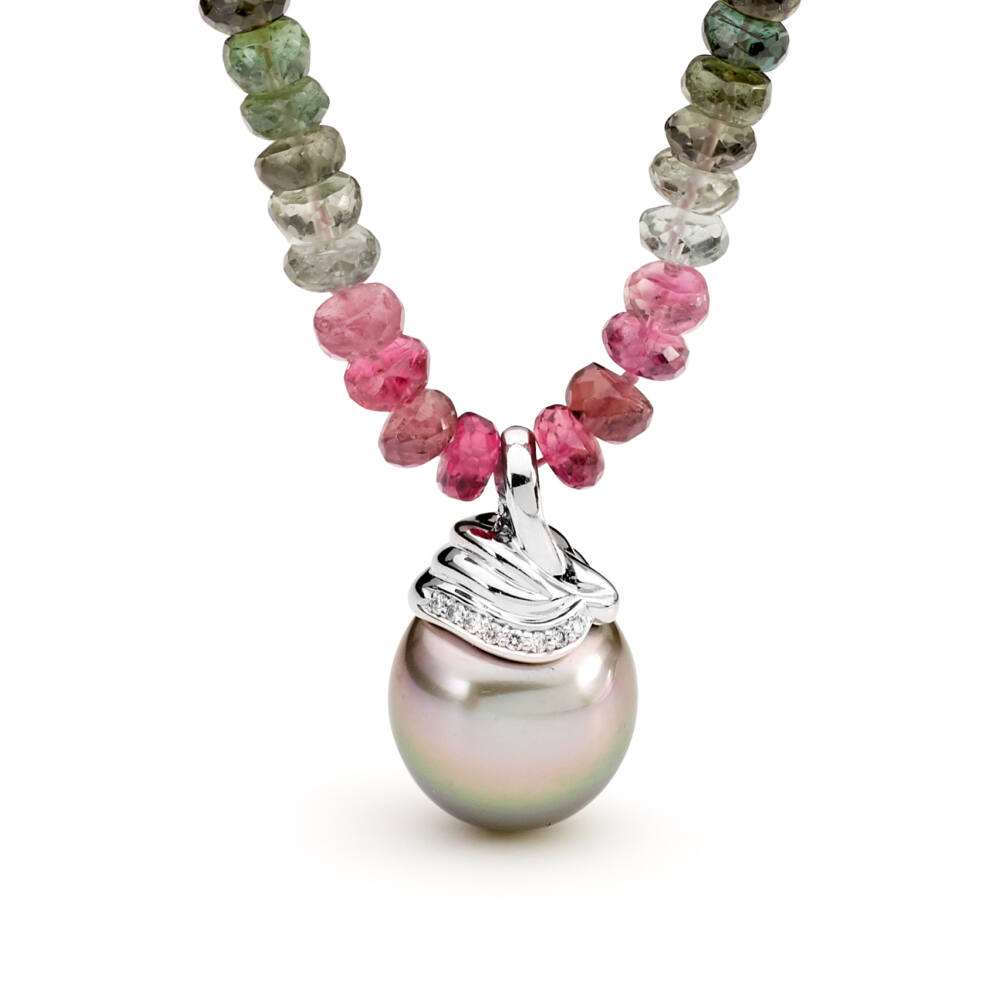 Tourmalines come in so many colours and most of these can be found in Brazil. Most popular at Aquarian Pearls is a combination of Watermelon Tourmaline Necklace and pearls. The pink and the green colours feature strongly in the tourmaline necklace. Since these colours pink and green occur within the iridescent nacre of Australian and Tahitian pearls, we often create stunning pearl enhancers set with watermelon tourmalines. The gem tourmaline necklace can then be worn on its own as a signature style statement, or with the enhancer attached. Since the enhancer has a hinge that easily snaps open and shut, the enhancer can be placed over the knot of the tourmaline necklace, or worn on another necklace composed of pearls or on a simple gold chain.

Aquarian Pearls designer Kate Vivas often works with pink tourmalines combining them to make stunning tourmaline necklaces that are beautiful in their use of the colour pink. Since we trade and design in pearls that come with a natural pink overtone most often found in Australian south sea cultured pearls and Tahitian cultured pearls, they make the best of marriages when combined to create a pearl and tourmaline necklace.

Adherents to the spiritual and transformative powers innate in gemstones believe that wearing a tourmaline necklace can bring out compassion and calmness, is grounding, and attracts abundance and also friendship, and reconnects us to Mother Earth.

A tourmaline necklace is a perfect gift for those born in October since the tourmaline along with the opal, are the birthstones of that month.

The Tahitian pearls have the most colours within their skins or layers of nacre and so pair up beautifully when combined with a tourmaline necklace. Cultivated in the Pinctada Margeritafera oyster throughout French Polynesia and the Cook Islands, The purples and pinks and violets and aubergine and green and blue colours seen within the nacre of the pearls match up so well with the tourmalines with their resplendent colours.

When we come across strong pink or purple overtones in Burmese or Australian or Indonesian south sea cultured pearls we often try to match them in a tourmaline necklace and these are a best seller. A green tourmaline necklace also sells well and makes an excellent match when paired with a predominantly green Tahitian culture pearl.

A tourmaline necklace can be composed of facetted beads or individual polished crystals strung and knotted and displayed for sale with an enhancer bale and pearl.

A tourmaline necklace does not have to be set with gold and we can offer a silver set option if required.

Pearls and tourmaline gemstones make such a beautiful combination, one bringing out the best qualities in the other, and we hope that you will be delighted with your Aquarian Pearls tourmaline necklace set with pearls or a single pearl and purchased from our office or online store.