At Aquarian Pearls we love using sapphires in our pearl Jewellery, creating custom sapphire jewellery. We also love taking sapphire necklaces and matching one pearl with similar hues and colours within the pearl to match the colour of the sapphire.

Sapphires are precious gemstones, a variety of the mineral Corundum. In chemistry terms, Corundum contains aluminum oxide with traces of iron, titanium, chromium, vanadium and magnesium. The most well know colour of sapphires is blue, made extremely famous by Princess Diana, Princess of Wales choosing a blue sapphire ring mounted with diamonds from Garrard, the Crown Jeweller situated on Regent Street in London.

Sapphires also come in yellow, purple, green, orange and pink colours. Pinkish orange sapphires are called Padparadscha, and a recent example of the use of these as an engagement ring was chosen by Princess Eugenie, the Queen’s grand daughter.

Sapphire is also the birthstone of September and the gem representing a 45th Anniversaries. 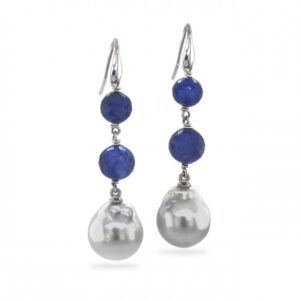 Kashmir sapphires receive the highest premium price followed by Sri Lanka and Madagascar. This is due to the very high quality of the stones cut from these mines, and in the estate business, from fabled stones and jewellery items with extraordinary providence.

Throughout the ages, the sapphire has featured in many an interesting story , all adding to the magnificent gems’ prominence and precedence among fine gems.

According to legend as recorded by Apollodorus in the 12 th century BC, Helen of Troy owned a magnificent star sapphire that she wore as a ring. Star sapphires are said to impart deep spiritual power and peace of mind on those they touch.

Charlemagne, the founding Emperor of modern France and Germany, following the fall of the Roman empire owned an amulet with a relic of the cross that Jesus Christ was crucified on, placed between two sapphires that was busired with the extremely religious Charlemagne in 814 AD. Exhumed 200 years later, the amulet eventually came into the hands of Empress Josephine, wife of Napoleon who wore it at her coronation in 1804 and it was later presented to the Archbishop of Rheims.

Pope Innocent the 3rd gave four rings to King Richard the Lionheart in 1198, the sapphire ring was to symbolize celestial purity and hope.

Shah Jahan had the Taj Mahal built as a tomb for his beloved wife Mumtaz Mahal and also had a throne constructed of sapphires and rubies and emeralds called the peacock throne that took seven years to construct and eventually found its way into the Persian Shah’s ownership.

In Russia both Ivan the terrible and Catherine the Great had a love of gemstones. Catherine was givena 337 carat blue sapphire later sold by Tsar Nicholas 2nd to finance a hospital in World War 1.

King Mindon, the penultimate ruler of Burma was obsessed with rubies and sapphires and had a treasure trove of the rough gemstones  from the Mogok valley shipped to his palace in Mandalay for his personal selecting and sorting.

As mentioned previously, the royal family of England have a love of blue sapphires and sales of blue sapphire rings surged worldwide after Princess Diana chose one as an engagement ring which was revealed to the world on February 24th 1981.

One of our favourite uses of sapphires are in gemstone bead necklaces with enhancers of pearls in similar colouring. We choose highest quality facetted sapphire beads and cabochon beads from our dealer in Jaipur, the centre of the coloured stone trade in India. Then we match a pearl cultivated in Australia or French Polynesia, or The Philippines or Indonesia for the colouring of the pearl, picking out the blues, pinks, greens and other colours within the iridescent pearls, and match the pearl to the colouring of the sapphires to make a truly splendid beautiful statement piece of sapphire jewellery that allows the owner to wear the sapphire beaded necklace on its own or the option of adding in the enhancer to top off the whole look.

We also cut sapphires to order to fit into pearl earring settings and we sell sapphire and diamond rings and sapphire and pearl rings.

A magnificent gemstone with so many colours allowing jewellers great creativity, at Aquarian Pearls, we love working with sapphires. 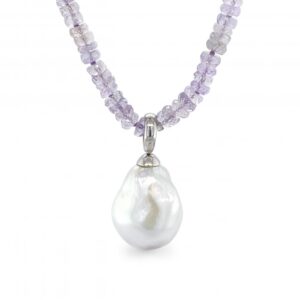 After the 2-3 year is over, the oysters are removed from the water and technicians delicately open the shell to reveal the pearl, however it is unknown until the oyster is opened what the oyster has created. Oysters that produce a high quality pearls are seeded again for another harvest.

Australian pearls have been crafted into sapphire jewellery that has adorned several of the best known members of the world’s Royal families and pearls have been synonymous with style and elegance and Grace for centuries.

Truly a globally recognised gem, Australian pearls are available in fine jewellery stores all around the world.